We don't have a gun problem, we have a Socialism problem.

Given the tragic events at Parkland High School in Florida today, you no doubt have heard scores of people on TV and the internet blaming guns for the tragedy. 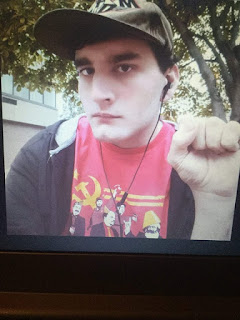 That is Nicholas Cruz.  Wearing a T-shirt that is glorifying Communism, and giving the "Resist" hand gesture.

If you need more details, Pamela Geller is reporting on this killer's social media footprint, including ties to various "resist" groups and pro-Islamic groups

That, right there, is the root of the death and destruction.  It is no different than the Liberal who shot Congressman Steve Scalise...the man who shot up the Country music concert in Las Vegas (after a history of being seen at Anti-Trump rallies)...the man who attacked Rand Paul in his front yard...the fires, property destruction, and attacks on cops that we have seen at the various "protests" that erupt whenever an urban thug is brought to justice by a cop...the violence we have seen at many Antifa protests...the attacks by Left wingers at Charlottesville...

...the pattern is too pervasive to be ignored.

This is not a gun issue--we've had guns in our nation since day one, and far more access to them in the past than we have today.  It's not even a question of the "evil" AR-15 "Assault Rifle"--America has had semi-automatic rifles for most of the 20th Century, and semi-automatic handguns for far longer than that...but only recently have we had the problems with mass shootings and violence.  Let's stop scapegoating the very tools that good, law-abiding Americans need to defend themselves from scumbags like this.

Instead, let us be adult enough and sober enough to realize the true cause--it is Liberalism, Socialism, Communism.  Whatever "ism" is your preferred term, they are literally trying to destroy America and kill any and all of us who love this nation and this country.  It is time to institutionalize or incarcerate every last Democrat, Liberal, and Socialist in America.

Our lives depend on it.

Travis Cook, "America's Evil Genius"
A lifelong Conservative who has realized, after 20+ years of advocacy and political involvement, that the Democratic Party in America brings literally nothing of value to the table in American politics, and are the source of nothing but problems and National Security issues.